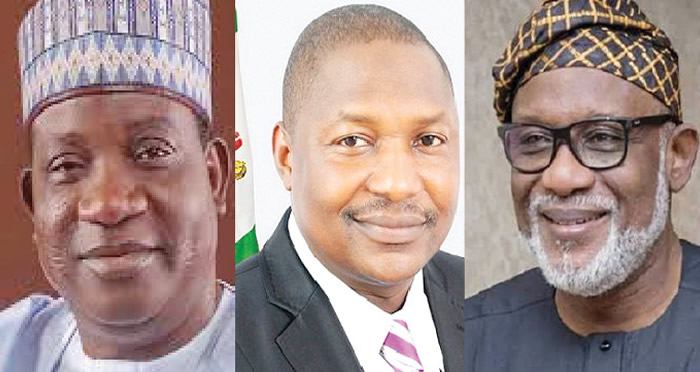 The growing level of insecurity, allegedly lopsided revenue sharing formula, and the long list of items that have remained on the exclusive legislative list in favour of the Federal Government, received generous mention during the meeting.

Various groups and individuals across the country had heightened their calls for the restructuring of the country.

Interestingly, restructuring and other key issues of national interest were echoed in the communiqué issued after the southern state governors’ meeting in Asaba.

The document read in part, “The governors agreed that the progress of the nation requires that urgent and bold steps be taken to restructure the Nigerian federation leading to the evolution of state police, review of revenue allocation formula in favour of the sub-national governments and creation of other institutions which legitimately advance our commitment to and practice of true federalism;

“Recommended that in view of widespread agitations among our various peoples for greater inclusiveness in existing governance arrangements, the Federal Government should convoke a national dialogue as a matter of urgency;

“Recommended that in deference to the sensitivities of our various peoples, there is need to review appointments into Federal Government Agencies (including security agencies) to reflect the federal character as Nigeria’s overall population is heterogeneous.”

Also mindful of the security problem caused by the invasion of predominantly crop farming communities by armed herders, the governors also resolved to ban open grazing.

Perhaps, taking a cue from this, governors elected on the platform of the Peoples Democratic Party met in Ibadan, the Oyo State capital, during the week to make similar demands.

It is instructive to note that the 36 state governors have several party and regional meeting platforms.

However, the Nigeria Governors Forum, which is the umbrella body for all 36 state governors, without doubt, remains the meeting point for governors irrespective of political, regional or ethno-religious affiliations.

Successive presidents have had more than a passing interest in its affairs, with a few attempting to influence the choice of its chairman.

With the benefit of hindsight, former President Goodluck Jonathan, recently reviewed the gathering of governors along party and regional divides and concluded that the NGF remained the best platform for governors to meet, discuss and proffer solutions to national problems.

He expressed the view that a partnership between the NGF and the Federal Government, would better serve Nigeria’s strategic national interests.

“The states, especially in a country where the local governments are very weak, are the entities the people always fall back to. So, if the governors of the states meet and engage in dialogue, interrogate things that are good for this county, then we will move forward.

“I don’t really enjoy the antagonism between governors’ groups, they should come together and discuss. If there are issues that are affecting one or two states, I think the governors should see how they can collectively come up with a way to address those issues.”

An Abuja-based public affairs commentator and Executive Director of the Civil Societies Legislative and Advocacy Centre, Awual Musa, said, “Those who understand the game of power, are aware of the inherent advantage in unity. They know that when people at any level organise themselves and unite to pursue a common goal, success is usually not far-fetched.

“This explains why more often than not, a lot of leaders especially in third world countries, resort to the use of divide and rule tactics when they fail in their bid to take control of a legitimately organised group of people as was the case with the NGF chairmanship election.

“The Jonathan-led administration simply rallied the PDP governors to attempt to break this body using party affiliation. The bid failed, the NGF is still standing.”

“For too long, we have erroneously thought that the power to make effective changes lies at Aso Rock. But without the states, nobody can get to Aso Rock. That is why for anyone to emerge as President of Nigeria, he or she must secure enough votes in two-thirds of the states that make up the Nigerian federation.

“Let us apply this wisdom to our present challenges. I call on Nigerian governors to stop waiting on Abuja to make changes, and instead convene a national unity summit of all Nigerian governors to address the thorny issues that are affecting the destiny of our nation, until they figure out a way to resolve them.”

“Forget about your party. Forget about your tribe. Respect your religion and allow it to bring out the better part of you. Meet together, talk together and come up with the solutions to all our collective challenges.”

Speaking in a similar vein, the Director-General of the Voice of Nigeria, Osita Okechukwu, told Sunday PUNCH, “Before coming to power in 2015, our party, the All Progressives Congress, under the leadership of President Muhammadu Buhari, knew fully the way the Nigerian federation was structured. It was and still is skewed in favour of a very strong centre.

“It is because we knew this that we campaigned vigorously for restructuring. Mr President took the bold step by signing some executive orders especially Executive Order 10, to strengthen institutions at the state level.

“This is where one would expect a body like the NGF to come in. As a body that enjoys the support of governors across party lines, Nigerians would not be asking for too much to expect our governors to come together and domesticate federal policies which are beneficial to the ordinary citizen.”

Also, an Abuja-based legal practitioner and politician, Abdullahi Jalo, stated that the executive powers in the hands of members of the forum could and should be used for the common good.

“The general mood across the board is for more power to be devolved to the states. In spite of some excesses, you see every now and then, one can say this is not really new. The truth is the concentration of power at the centre makes the centre too attractive. In relative terms, it is easier to see a governor than to see the President for example. One cannot overemphasis the level of development the nation will begin to see with the unity of purpose among members.”

He stated that even without a formal declaration, state governors or governments were already funding the various police commands in their states.

“Without their support, policing this country will be  an impossible task,” Jalo said.

However, elder statesman, Alhaji Tanko Yakasai, observed that the first knotty issue agitators for restructuring should do was to first define what they meant.

According to him, it is not enough to canvass restructuring because it means different things to different people.

Yakassai said, “To the man in the South-East, restructuring may mean a new nation carved out of Nigeria; to someone from the South-West, it may have an economic undertone

“To the man from the South-South, it may mean resource control. We have to come to an understanding of what is practicable and agreeable on this issue to make progress.”

The current NGF, under the leadership of Governor Kayode Fayemi of Ekiti State, is still engaged in a struggle to assert its authority on issues state governments believe they deserve more than a right to just be heard.

For example, it has been argued that if indeed Nigeria is practising a federal system of government, individual states should be allowed to negotiate appropriate wages they can afford to pay to their workers against the current practice where the Federal Government fixes a minimum wage and expect states to comply most of which lack the financial capacity to pay.

To make matters worse, states endowed with mineral resources from which they can earn money to meet their obligations are required to go cap in hand to Abuja to seek permission before any mining activity can take place.

With the growing level of insecurity across the length and the breadth of the country, the clamour for state policing has grown louder. Governors in the South-West and the South-East have since agreed to set up security outfits to complement efforts being made by conventional security outfits.

What many expect is a joint position by state governors to put pressure on both the legislature and the federal executive to expedite action on the passage and signing of relevant bills to make state policing a law as well as the reduction of the items on the exclusive legislative list a reality.