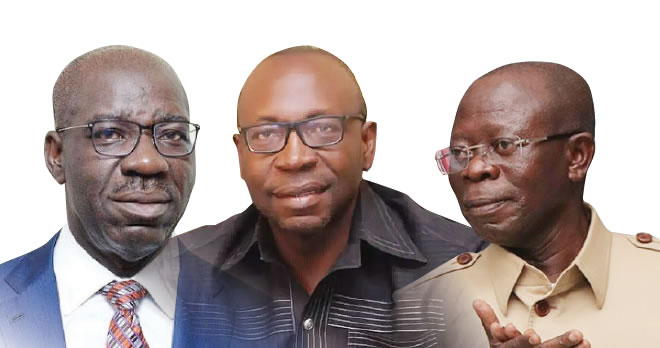 The Edo State Governor, Mr Godwin Obaseki, on Tuesday, said the ruling of the Supreme Court that affirmed his victory in the September 19, 2020 governorship poll and dismissed the alleged certificate forgery suit against him, signals an end to godfatherism in the state and freedom for Edo people.

Obaseki, who spoke to journalists after he was received by a mammoth crowd of supporters at the Benin Airport, noted that “we cannot look back” after repositioning the state.

A statement quoted the governor as saying “fake” people fighting him are the same pulling the country down.

He said, “For us in Edo, this victory means freedom and emancipation; it means that we must rededicate ourselves to our people because democracy is all about the people.

“Democracy is not about an individual or godfather. We have defeated the godfather finally in Edo, in our quest to take Edo to where it should be.

“They threw all sorts of trash at us, but by the grace of God, the verdict of the Supreme Court is just the final straw. All the court cases that we have gone through, all the challenges we have faced in the last two years, we have won every one of them.

“We cannot look back. At this time of the life of this country, we are faced with major critical challenges and as if we knew, we had started repositioning our state. The people who are fighting us are the same fake people that are pulling this country down even at the national level.”

The governor spoke barely 24 hours after the immediate past National Chairman of the All Progressives Congress, Adams Oshiomhole, and the APC candidate in September 19, 2020, Edo State Governorship election, Osagie Ize-Iyamu, appealed to Obaseki to be magnanimous in victory.

They appealed to Obaseki to consider a political solution to the case involving members-elect of the State Assembly who failed to present themselves for inauguration.

In his letter to Obaseki, which was made public by Oshiomhole’s media aide, Victor Oshioke, in Benin, on Monday, the former APC national chairman urged the governor to put the past behind.

On his part, Ize-Iyamu, who dwelt on the issue of the 14 lawmakers-elect and some Local Government Council Chairmen in a separate letter, said, “Though the matter is in court, you are in a vantage position to consider an out-of-court settlement of the issue, in the overall interest of our state.”

Reacting to the congratulatory messages, after the Supreme Court ruling by Ize-Iyamu and Oshiomhole, the governor said he was “yet to receive an original copy of the letters signed by the duo”.